We all know the iPhone 4s is one of the fastest smartphones available when it comes to getting a GPS fix. I have seen Android devices (OG Droid, I’m looking at you!) taking THREE whole days to find out it was just brought to the middle east, while the 4s answered the turning-off of flight mode outright with “you’re still on this runway, head into that direction to get to the cabs” while the flight attendants where still fiddling with the plane’s door.

But how do current smartphones fare when it comes to accuracy of the determined location? Can we really throw our standalone GPS devices away now? 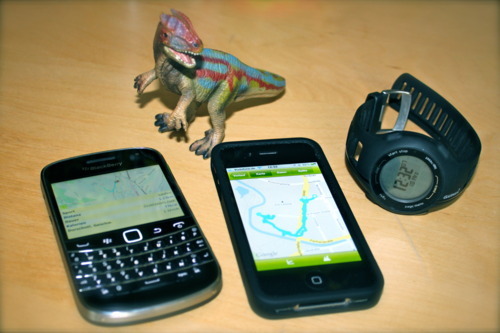 Today I recorded a small walk with my family using a Garmin Forerunner 210 GPS watch (this is actually a fitness device including a heart rate monitor strap) and two smartphones: the Apple iPhone 4s and a BlackBerry Bold 9900.

On both phones, Endomondo SportsTracker was used to record the walk. It took us about one hour to get to Leipzig’s Zoo, grab a bratwurst, take a peek at the monkeys, and rush home again because it started to rain. Our average pace was somewhere around half an hour per kilometer—with two kids bringing doll’s prams this is just as fast as it gets. 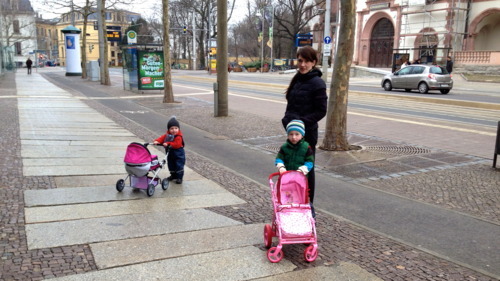 Shockingly, it was not the iPhone that made the race here. While, of course, the black slab was the fastest to find enough satellites (with the BlackBerry coming in 2nd place), the quality of the recorded track is the worst of all three devices.

Even the GPS watch sometimes did not exactly hit the nail, but still, a smartphone cannot beat the accuracy of a standalone device right now. Whats worse with the iPhone: The timing seems to be a few seconds off and there are some more-or-less heavy misfires amongst the recorded track points.

The difference can be clearly seen on this video comparison:

Being a bit more “jumpy” when recording GPS tracks may not sound that bad at first, but in this case, the iPhone recorded a track that is nearly 25% longer(!) than what the Garmin delivered. The BlackBerry’s, on the other hand, turned out to be 5% shorter that the watch’s.

Of course, these are all not scientific measures, I don’t know for sure how long the path really is, we where probably moving ten times as slow as the average jogger, the sky was rather clouded, and the distance we walked was also nothing really fancy—but still, this is something to watch out for if you want to count on your iPhone for your running workout. 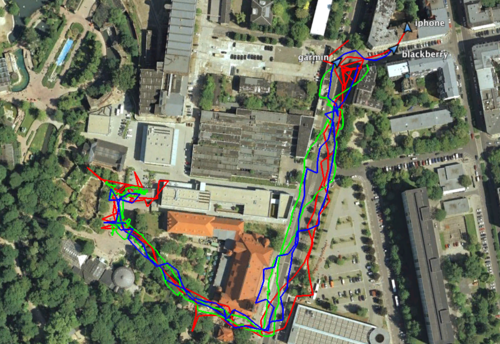 The lower recording detail is probably a software issue and other apps may be available, which record tracks with a higher frequency, but in the current test both phones only recorded a fifth of the number of track points, compared to the Garmin: That’s around two per minute for Endomondo, and one every five seconds for the GPS watch.

The smartphones did not record any height information (or Endomondo did not export this) so I did not compare anything like this. Also, I’m very interested in how the current Lumia devices and the N9 from Nokia fare—but I don’t have one at hand right now.

Conclusion: If you have a standalone GPS unit, continue using it! If not, then your BlackBerry works fairly good, too. If you want to use an iPhone to measure your jogging trail, better make sure you’re able to edit out any jumps afterwards, if needed.